so far, more climbers have been taken permission to mount Everest ,The highest peak of the world in the spring season, amid the covide-19 pandemic. The Department of tourism ministry of culture,tourism and civil aviation, on Friday issued a mountaineering permit for the highest number of 43 climbing group of Everest. so far 408 climbers from 43 climber groups have taken permission to climb Mt. Everest, according to the department’s mountaineering branch. there are 93 women and 315 men. This number is higher that in the spring of 2019. in the spring of that year,41 groups of climbers had taken permission to climb mt. Everest.According to the department,742 climbers from 85 climbers, including 43 from mt. Everest,have obtained permission to climb. After of climbers to climb Lhostse. five groups of climbers have been Allowed to climb Dhaulagiri and four in Annapurna Himal. so far, more than Rs. 714.8 million has been collected from mountaineering in the spring.more than 660 million Royalties have been collected from Everest alone. The department understand that mountaineering, which is being carried out amid the covid-19 pandemic, has sent a positive message around the world that the country’s mountain tourism is safe. Mira Acharya, director of the department, said that the arrival of a large number of foreigners in Nepal’s 8000m high mountaineering has encouraged mountain tourism and sent a positive massage to the international market. she said that the weather will help to climb mt. Everest from this weak. most climbers now reached the BC OF Everest. the Icefall Doctor, who made his way to the summit of Everest,has now reached camp 4 of Everest. The previous spring climb was postponed due to the covid-19 epidemic. 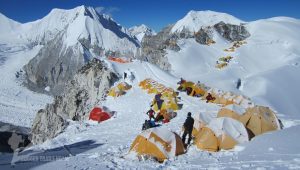