At least one person at the mount Everest BC  has reportedly tested positive for COVID-19. The number of mountain climbers aiming to tackle Everest this spring is approaching the recoed set in 2019. Not even the highest mountain on earth has been spared the corona virus. At least one case of the virus has been reported at the BC on the south side of mount Everest in Nepal.US magazine outside cited an unnamed source at the BC in its report that a climber who had been flown out with suspected high altitude pulmonary edema tested positive for COVID-19 at the hospital where he was being treated in Kathmandu. This has forced his team at the BC to go into quarantine. The infected climber ins a  Norwegian, who has said he believes he may have contracted the virus while trekking to the BC. other reports indicate that as many as tree climbers may have been infected. The Npealese ministry of tourism, however, played down the reports, desscribing them as rumors’that where being inveetigated .on an upbeat note, the ministry said it had issued 377 mount Everest climbing permits as of April 21. this is only four fewer permits than it issued in 2019. 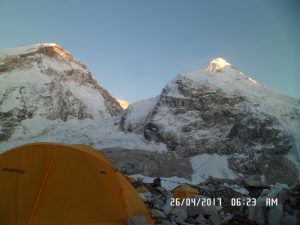