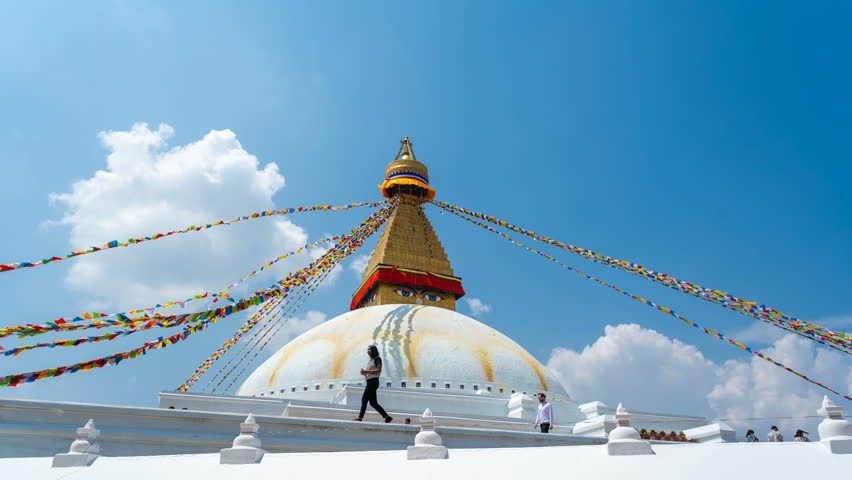 Bouddhanath also called ‘Bodnath’ is one of the most important Buddhist shrines of Nepal. It is also considered to be one of the crown jewels of the city of Kathmandu. This huge stupa located in the Tibetan district of the Nepalese capital is the largest in the country and one of the largest in the world. The stupa has always been a very important place of pilgrimage for Buddhists from all over the world. Bouddhanath, with its rich history and its beauty, has attracted thousands of tourists each year, enabling it to appear on the UNESCO World Heritage List. Bouddhanath Tour offered by Legends of Himalaya will make sure that you have a chance to experience the history and tranquility that this ancient pilgrimage site has to offer.

The Bouddhanath stupa dates back to the 14th century. It is considered to be one of the largest and oldest shrines in the world. The exact date of the foundation of the ‘Stupa’ is not known, but it is believed that the shrine was founded by the Licchavis – a local ruling dynasty who ruled Nepal from (400-700 CE). It is also said that the Tibetan emperor Trisong Detsan participated in its construction. Excavations were made in the late 15th or early 16th century and revealed the bones of King Amshuvarma amongst the grounds in the shire. During the severe earthquake in March 2015, the Bouddhanath stupa was severely affected and many parts were destroyed. The entire structure above the dome and the religious relics it contained were damaged. The renovation of the stupa did not take long and started in November 2015.

Bouddahnath is located approximately 6 kilometers east of Kathmandu. One of the most popular shrines in Kathmandu is the Bouddhanath stupa. Each year, it attracts many tourists but also many pilgrims and faithful. Located in the heart of the Tibetan district, the stupa is perceived as the most sacred of the Tibetan Buddhist centers outside Tibet. Between shops, restaurants, street vendors, tourists, and locals, the neighborhood has become very lively and immerses you in a unique atmosphere not to be missed.

The entire structure of the stupa, which stands 40 meters high, symbolizes the Buddhist religion. The base of the square-shaped stupa consists of three terraces that take the form of a giant Mandala that the faithful can walk during prayer sessions. On the base is also a Harmika which represents the eyes of Buddha. The upper part, meanwhile, takes the form of an elongated pyramid representing the path to enlightenment. The stupa also has 108 niches which each contain a statue of Buddha. The base of the stupa represents the sign of the earth, the dome: the water, the tower which surmounts the dome represents fire and the crown and the pinnacle the ether.

We can also describe the stupa as a large hemispherical religious building which contains the holy relics of the region’s Buddhist religion. According to rumors, it is believed that the stupa contains bone fragments from Siddhartha, a great founder of Buddhism. It is said that the stupa also represents the cycle of rebirth in which believers will be brought to attain “Nirvana”. You will not be able to escape the prayer wheels placed around the relic. The Tibetans rotate them to increase their merit and answer their prayer.

Many Tibetans took refuge in Nepal during the Dalai Lama’s flight in 1959. For this, around fifty gompas or monasteries were built around the stupa. Gompas are also considered places of prayer, meditation, and schools of Buddhism education for monks and are of great importance for Tibetan Buddhism.

You can, therefore, take advantage of your visit to the Buddhanath to discover the different monasteries that surround it, the Kagyupa Gompa, the Chinya-Lama Gompa, the Nyingmapa gompa, the Gelugpa gompa and the Sakyapa gompa for example. These monasteries are located more precisely in the northern and eastern part of the Bouddhanath Stupa, except for the Sakyapa gompa which directly joins the western entrance to the stupa. Gompas are also characterized by the presence of the wheel of Dharma or the wheel of knowledge on their pediment.

So come embark on this historical tour of faith, religion, history, culture – offered exclusively by the Legend of Himalaya.