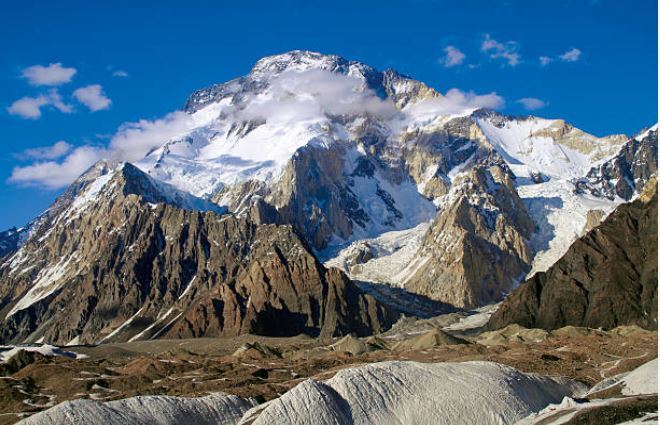 The Broad Peak (initially called K3), with the altitude of 8,051m – is the twelfth highest mountain on Earth and the fourth highest from Pakistan. Located in the Karakórum, between the border of China and Pakistan, Broad Peak lies approximately 8 km from Mount K2. Broad Peak was baptized as K3 (meaning, third peak of the Karakórum) by T.G. Montgomery in 1856 The Broad Peak is part of the massif of Gasherbrum, in the Baltistan area. Broad Peak’s English name derives from its broad summit, which has an extensive total length close to one kilometer. Broad Peak Expedition, despite being labeled an easy expedition requires prior trekking knowledge and experience to scale the peak safely, due to its technically difficult routes and climbs – and should only be attempted by only those with the skills and expertise of climbing high altitude peaks.

Broad Peak has five summits: Broad Peak (8051m),  Rocky Summit (8028m), Broad Peak Central (8011m), Broad Peak North(7490), and Kharut Kangri (6942m). The mountain was first ascended between 8th or 9th of June 1957, by an Austrian expedition team led by Marcus Schmuck and his team consisting of Fritz Wintersteller, Marcus Schmuck, Kurt Diemberger and Hermann Buhl. Every single team member made it to the top of Broad Peak that day.

Legend of Himalaya with its expertise and knowledge will ensure that when you embark on the Broad Peak Expedition, the trip will be as seamless as possible. Through our years of stellar service and hands-on experience, we are highly reputed for consecutive success in climbing 8000m+ peaks. This is because we have a very strong and experienced expedition team that will make sure that you are not only safe but also a memorable one. Our 52 days itinerary for the expedition starts when you arrive in Islamabad.

The ideal climbing season for Broad Peak starts in June and concludes in August.