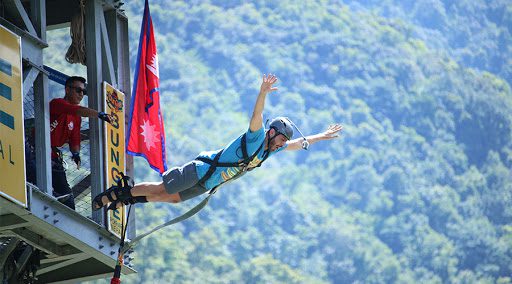 Nepal, home to some of the tallest mountains in the world, is also home to the highest free fall bungee jump in the world – 160 m or 500 feet. Jumping off a suspension bridge and being pulled back up moments before you hit the water is the ultimate thrill and adrenaline junkie hopes to find.

There are two places in Nepal that provide this ultimate thrill ride.

Pokhara more commonly known as the gateway to the mountains, home to Phewa Lake and countless other attractions – has become home to the only other place for bungee jumping besides the Last Resort near the Nepal-Tibet border. Pokhara already had attractions like paragliding, zip lining from the Sarangkot Hill – now it boasts yet another attraction ‘Bungee Jumping’ added in 2014. Which has become a sought after activity by people of every creed, color and race. The bungee jump from Hemja is often referred to as the ‘Water Touching Jump’ – as you will be able to touch the water of an artificial pond 20 meters deep,  moments before the bungee cords pull you back up. It provides all the thrillseekers the adrenaline rush they were looking for.

Bungee jumping in Pokhara is not as high as the one from The Last Resort – from only an elevation of 80 meters. The bungee park can accommodate 30-40 people everyday. Whether you jump solo or with a partner, it is still a thrill seeking adventure. Once you have made the jump, a boat will collect you from the bottom leaving you giddy with joy and a sense of accomplishment.

Being a high risk activity, the Tourism Board of Nepal applies the following restriction and does not allow people with the following medical conditions to partake in the activity. The list includes :