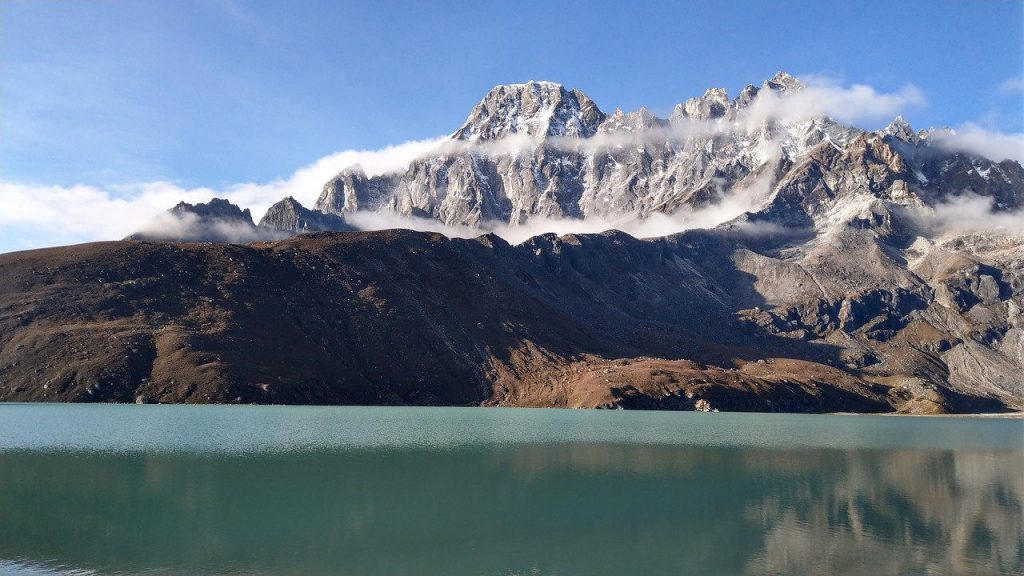 At more than 4500m above sea level, within the heart of the Khumbu region in Nepal, hides a jewel of the Himalayas the six turquoise lakes of Gokyo. The route connecting the lakes is known as: the Gokyo Trek. It is often referred to by trekkers as an alternative to the daunting Everest Base Camp Trek. It offers one of the grandest treks in the world at the foot of Everest, with a high mountain atmosphere and breathtaking landscapes. The high altitude trek allows one in the discovery of high Himalayan valleys with impetuous river torrents, opal lakes, high altitude villages, and Buddhist monasteries.

Gokyo Lake, the world’s highest freshwater lake system in the world – consists of six massive lakes, located at an altitude of 4,700m – 5,000m resides in the Gokyo Valley The place is held in reverence by the Hindus and Buddhist alike, as it holds cultural significance to both religions.

The trekking route starts from Lukla – a city located in the alcove between huge mountains and only accessible by plane. Arrival at the airport brings with it the first great emotion (or adventure) of the trip, the airstrip is wedged between the mountain on one side and a sheer cliff drop on the other.

The trekking route crosses through numerous forest landscapes, with giant rhododendrons, hundred-year-old trees and mosses. The landscape emanates the quality of magical presence, with eagles gliding high up in the air, and mountains surrounding on all fronts;  instilling a vibe of wanderlust within a person.

The route inter-connects all the six lakes, then climbs to the top of Gokyo Ri (5360m), and onto Cho La (5,420m) to join the path of Everest base camp. This can be discovered before reaching Kala Pattar(5,600m); a veritable balcony into Everest. Atop these aforementioned places, the most beautiful 360-degree view of the entire Everest region can be vividly seen. It will be an image not easily forgotten by anyone who witnesses it. All-in-all the Gokyo Trek, is primarily for all the sporty trekkers, who are in love with spectacular views of the Himalayan giants and do not want the hustle-bustle of a popular trekking destination within the region.