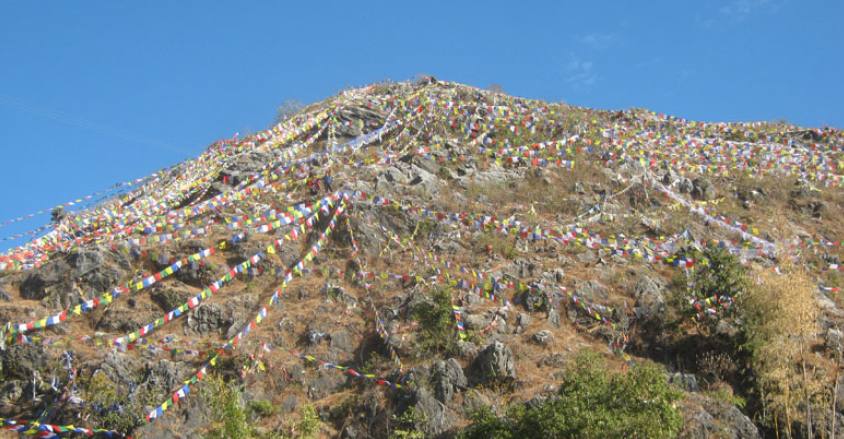 Halesi Maratika cave you meditated to gain immortality. you perfected the practice of longevity and met Buddha Lord of Infinite Life.Birth and death lost their hold on you, your body matured into immutability. The immaculate white lotus, a Padmasambhava hagiography from the sera khandro treasure cycle. after Padmasambhava had transformed his execution pyre into the lake we now know as Tso Pema, in modern day Himachal Pradesh,he is said to have flown to maratika cave in, eastern Nepal with his consort, princess Mandarava.According to Jamgon kongtrul, for three months they engaged in longevity practices resulting in seeing Amitayus, the Buddha of infinite Life, face to face. Maratika known locally as Halesi, is near khotang in the eastern Nepal Asix hrs drive from kathmandu,it can also be reached by bus or helicopter,but due to the road conditions, I would strongly advice against bus travel. The site itself consists of three hills on a ridge. These are known as Manjushri, Avalokiteshvara and Vajrapani. Avalokiteshvara Is the middle hill and is where the main cave system is located. there is also a small cave on the far cliff face of Manjushri hill, where there are occasional retreatants. The main, upper cave in Avalokiteshvara hill, is where Padmasambhava is said to have attained immortality. Specifically in a small alcove at the back of the cave. one enters this cave by coming down a set of step. to the left is an area where many Buddhists will do meditation and puja. slightly above this up some steps is a natural Shiva lingam. below this is the main cave,with the aforementioned alcove.around the cave are various Hindu shrines, mostly related to Lord shiva. There are also various rock formations which are said to be getaways to various hells, pure land and such. A large community of ats add a specific smell to this cave.Despite being quite busy, most pilgrims are very respectful, so you can practice without being disturbed. as with any holy site in Nepal,saturday is peak time. personally i found the lower cave, which is also the  largest,to be the best for practice. this was mostly due to it having less visitors and its sheer size diluting the noise.you enter from below and walk up a long tunnel until you reach a plateau where there is a huge opening in the cave roof.it is almost big enough to be used as an underground base in a james Bond film. Padmasambhava however used it as a place of practicing Vajrakilaya,and if you have the right karma,you will see some relevant images in the cave walls. there are also various rockforations which have Buddhist, Hindu and in some cases Kirat, mythology attached to them, such as the two rocks just inside the cave door,which are meant to be the the body and head of a demon decapitated by Padmasambhava. Vajrapani hills has no caves, but is a nice place for raising pryer flags and doing sang purification practice. it also has nice snowpeak views and is much less penty of guesthouse between Avalokiteshvara and Manjushri hills, most of which seem reasonably priced.