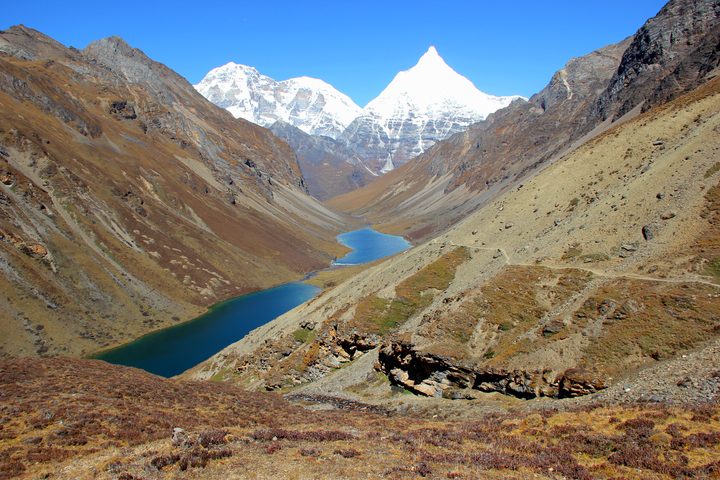 The 8 day trek and expedition to Jomolhari in Bhutan, is amongst the most exhilarating trek offered by Legend of Himalaya. Bhutan Classic trek around Jumolhari starts at Paro and ends at Doden – near Thimpu (capital city of Bhutan). As the trekking route is situated in a high altitude, one has to be acclimatized – which is done via a hike to the Tiger’s Nest Monastery in Paro. After the body has completely acclimatized, the trek will start from the historic Drugyal Dzong. The first three days of the trek follow the Pachhu and the Paro river; heading towards t’dehe Jangothang base camp. The trekking trail emcompassess various countryside of the Paro region. There are scattered farmhouses, numerous orchards and an abundance of fields covered with rice paddies. The Jangothang base camp offers an unobstructed view of Mount Jumolhari (7,315m). It is the second highest peak in the world which has yet to be climbed.

The trekking route passes through high pastures, often used by herders to feed their yak. The area is rich with natural flora, which is an ideal place for the yaks to graze, along with other animals. Furthermore, the route takes you to the highest settlement in the north with a unique culture – the Lingzhi.  The trail also provides you with the view of Mount Jinchu Drake (6,989m) and Tshrim Gang (6,789m). Once you have reached Lingzhi, you will have to start your descent to the lower valley of Thimpu. While descending, you will have to make your way through many gorges formed by many rock canyons, along with divergent vegetation fields. The trekking trail will finally culminate in the northern part of the Thimpu valley.